I let my son dress himself most days – pick out his clothes, put them on, the whole nine yards.

That boy! He wants to always wear shorts – even when I think it’s too cold out. It doesn’t seem to bother him. (Okay, rant over.)

Saturday, he wanted to wear one of his church suits to play in. Being two and still occasionally prone to messes, I offered him an alternative – his play suitcoat and ties, a button down shirt and a pair of pants that wouldn’t clash horribly. He accepted the suitcoat, picked a tie that sort of matched his shirt, but rejected the pants. He wanted shorts, and not just any shorts. He wanted his bright blue gym shorts.! They so didn’t go with his suit coat. To top it off, he wore boots – Daddy’s boots. (I did persuade him to switch to his own later in the day.) 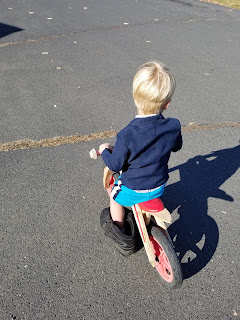 While this outfit really was quite odd, I was okay with it. I’m used to inside-out, backwards and, sometimes, upside-down clothing. But my husband had problems with it. As we were heading out, he grabbed a more visually-pleasing change of clothes for him.

While I was okay with letting my two-year-old wear such an odd outfit this time, I haven’t always been. There was a day when I would help him correct his clothing mistakes because they bugged me. I had to wrestle with how his style of dress reflected on me. Let’s face it, we all look down on the parent with the kid whose clothes aren’t up to our sense of fashion.

As I wrestled with my son’s lack of care of how his clothes look, I realized that a two-year-old getting dressed by himself is a major accomplishment.  If his shirt is inside out, it’s because he hasn’t mastered the art of turning it rightside out. If it is backwards, it’s because he thinks the front design is supposed to go on the back. If he is wearing outrageous clothes, it means that he obeyed me when I told him to get dressed. I know that as he gets older, he will master the skills he is currently missing.

As they grow older, they will become aware of how they should dress and the peer pressure associated with it. I don’t want to force them to conform to the pressure too soon. I want to allow them to be children, even if that means that they are wearing a suit coat and gym shorts. The days of my son’s crazy outfits are limited. All too soon he will be grown. Instead of being embarrassed and changing his clothes, I choose to laugh at his combinations. Parenting is hard. I let him add some humor to my day.

Great job on your blog Rachel! I don't have any problem with letting my son express his creativity either, except when he decides to write on the walls and the leather sofa!!

I thought he looked pretty spiffy myself 🙂 It's true, they lose that free and easy spirit all too soon because they are told (or see) how things are 'supposed to' be or look. :-/